Before I start writing this, I'm overjoyed writing this review particularly because this movie "Super Deluxe" written in Thiagarajan Kumararaja captures the beauty of cinema in it's purest form . He made a name for himself through his first movie, Aaranya Kaandam - a neo-noir movie that was celebrated by critics for portraying the rawness in characters, for making a poster that captures' movie's ideology and for it's technical brilliance in cinematography, music and screenplay . The movie did win a lot of awards - most noticeably, the Grand Jury Award for the Best Film in the South Asian International Film Festival. However, it was unfortunate that it didn't do well enough in the box office and looking back I feel that movie was quite ahead of it's times.

The movie audiences over the past 4-5 years have changed significantly with movies focusing on dark humor genre like Soodhu Kavvum, Neram have surprisingly done well in box office. Therefore, Super Deluxe - a 3 hour song-less movie with similar cinematic flavor as Aaranya Kaandam seems to be doing well in box office this time (with full shows in most theaters that I know of). Box office success is important because we need more brave directors like Thiagarajan Kumararaja who do not compromise the artistic sanctity of cinema for the sake of commercial success. 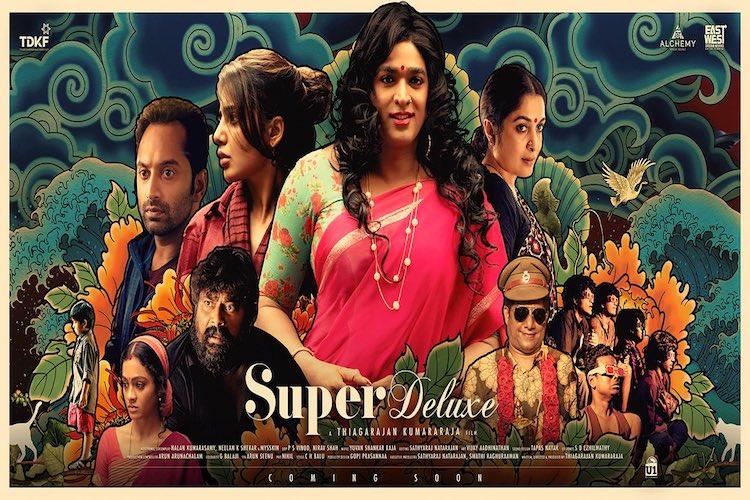 Now that you know that movie has been doing well in box office, lets jump to the review aspect of "Super Deluxe" - WHERE DO I START? I'm spellbound by the experience I got seeing this movie particularly because of the "detailing" used throughout the film. I regularly read the film reviews of Baradwaj Rangan and I guess he has captured the part that startled me the most about this movie - "Intellectual Montage". It is a method of creating cinema by connecting small piece of images/videos together to form complex ideas which when put together will leads to film's ideology. So, in simple terms the movie is loosely based on 'Chaos Theory' where everything that you see on frame will have an overarching meaning in the end. And, the director goes about narrating this theory in a non-linear manner through events happening in various characters' life. The beauty of this movie is that every small story by itself has a meaning and all these small stories put together also has a meaning - where the writer/director shows his class and the mastery over this craft. No wonder he took eight years and took the help of four writers to finish the screenplay for this movie - it was all TOTALLY WORTH IT!

Another intellectual stimulation you get from this movie, is the indirect questions that director poses to the audience through the props and detailing used. If you had watched Aaranya Kaandam , you can understand this part of the review better.

All these questions sort of raise a doubt on whether Aaranya Kaandam is a sequel/prequel to Super Deluxe or is it just the style of the writer/director Thiagarajan Kumararaja. To this, only time can answer, maybe in another 8 years?!

Coming back to Super Deluxe, the ensemble star cast of the movie have done a spectacular job. Right from stars like Vijay Sethupathy to the child actors like Ashwanth Ashokkumar - everyone have played their part with utmost sincerity. I was surprised to see Samantha is such a powerful role and she has definitely given her career-best acting performance in this film.  Another aspect that was done brilliantly was the music. Yuvan Shankar Raja has ensured throughout the film that music is just about minimal and adequate. Coming to cinematography, the way camera pans throughout with it's wonderful greenish-yellow tinges makes sure you're always on the brim of the seat. Though, the movie is long running for 176 minutes, I didn't feel that any part of the movie needed more trimming. Every aspect, every detail looked to be necessary to say the overarching philosophy, " Everything that is happening in this world is connected in some way and few things happen due to mere coincidence".

She is a Never Ending Story!

Been a busy day at work which brought me to my blog to try an interesting idea. I wrote a poem in Tamil (my mother tongue) and tried to translate that in (English and Hindi - basically the languages I know) using a combination of software and my knowledge of the language. The rhyming scheme might only apply in Tamil - the language of my thoughts but still its fun looking at how a poem in one language can shape up in other languages.

English: She is a Never Ending story
Can my breath be forever filled with your aroma?
Can all the words I utter keep murmuring your name?
Can I get your love every second I live?
Every moment I spend with you, feels like I'm in paradise.