- April 19, 2015
In one line, with O Kadhal Kanmani (OKK), Mani Ratnam makes a comeback and gives a strong punch to his critics not to write him off Kollywood. Coming to the movie, it was evident from the trailers that OK Kanmani will definitely have shades of Alaipayuthey but what I personally loved is the way in which the story was rendered. When you watch the movie, you will find a lot of overlaps with many of Mani Ratnam's previous hits but at the end of the day, this movie presents the thoughts of a large percentage of the current generation about marriage. Some would still feel the movie is unreal but I say with time, live-in relationships will been seen differently.

It would be unfair to compare Alaipayuthey with OK Kanmani as there is a 15 year gap between both. But, both were written and directed by Mani Ratnam with his revered technicians PC Sreeram (Cinematography), AR Rahman ( Music), Sreekar Prasad (Editing) and Vairamuthu (Lyrics). Both these movies wonderfully renders the maturity of Love, I would rather say companionship between the lead pair. In Alaipayuthey, the lead pair Karthik (Madhavan), a computer engineer and Sakthi (Shalini), a doctor want to marry and they request their parents to initiate talks of marriage. In the end, they marry but live in their respective houses to avoid fissures between families. Once the truth is revealed, they end up living together as husband and wife and understand the love between them in the climax.

In OK Kanmani, the lead pair Aadithya, a video game developer (Dulquer Salmaan) and Tara (Nithya Menen), an architect meet in a railway station on opposite tracks. They meet again in a marriage (both inline with Alaipayuthey) where they start talking and they share the same thoughts about marriage. Then, the entire first half is dedicated for their romance with songs of Mental Manathil and Aye Sinemika soothing your ears. Their romance is fresh, fast and some of the things which Aadithya does looks cliche but the way Tara responds to each of those things is different. Tara (Nithya Menen) is the fulcrum of OK Kanmani and the way in which she handles things showcases how the woman of today decide and act on things with conviction. Tara unlike Sakthi in Alaipayuthey does not adjust to what her boyfriend/husband does instead she demands her space in this relationship. Whenever Aadithya asks her to come to US and settle with him, she is strong on her passion towards architecture and instead asks him to come to Paris. Tara is definitely a representation of the woman of today who want to establish their careers and also lead a life with a companion.

So what's special about OK Kanmani or is it just the new version of Alaipayuthey? Nope. We have another pair who capture the eyes of the audience and this parallel love track between Ganapathy (Prakash Raj) and Bhavani ( Leela Samson, she is the former chief of  Central Board of Film Certification ) who suffers from Alzheimer's disease. Aadithya lives in Ganapathy's house as a paying guest and during this period he meets Tara and they both want to live together. When Aadithya comes with Tara to propose this live-in relationship to Ganapathy, he immediately hesitates. Here again, it was Tara who says it with conviction to Ganapathy but after initial hesitancy, he agrees to it. As this young bubbling couple of Aadithya and Tara live in one room, in another room there is Ganapathy and Bhavani who share a great companionship. Both Prakash Raj and Leela Samson have shown their acting prowess through this role and in the end, looking at them Aadithya and Tara realize that marriage is not about love or lust, it about companionship and understanding. They marry finally but proceed with their individual careers with Tara continuing her higher studies in Paris while Aadithya goes to US for his video game development. It's not the usual they lived happily ever after kind of a climax.

The cinematography in the songs is a standout feature with wonderful use of light and colors by PC Sreeram. The background scores are catchy and apart from Mental Manathil and Aye Cinemika, the other songs are ordinary. The editing is slick though I still feel the first half could have been trimmed by 10 minutes. In the first half, the romance between the lead pair is overdone and becomes repetitive beyond a point. Mani Ratnam has totally surprised me with OK Kanmani especially about the kind of story he has taken. It's a subject which is controversial in a country like India, but Mani Ratnam besides his age has come out with this and dealt it sensibly. OK Kanmani will definitely not be a cult classic like Alaipayuthey but it has given us back the Mani Ratnam's touch. 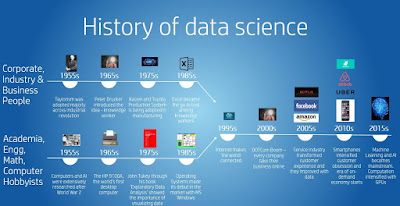 I got an opportunity to talk about this topic two weeks ago in SOTEDx - an internal TED inspired talk in HP Singapore. Just thought it would be good to write it as an article and hence you are here. Whenever I come across something trending, I generally go back to history to see how it evolved. By looking at history, it helps me to demystify the trend and think logically. I did the same for Data Science to understand what events in history directly/indirectly influenced it to become pervasive in the business world today.

In 1955, in the midst of the second industrial revolution, Taylorism or Scientific Management was extensively adopted in industries. Through his theory, Taylor demonstrated that if a process workflow is analyzed and data is collected from all variables involved in the process we can improve over ti…
Read more