- June 01, 2014
This is a guest post by an promising fashion blogger Anu Mohan. She has learnt immensely about blogging, fashion (her strong point) and maintaining healthy friendships on social media in past few months. With less than a year of blogging, she has given an interview, her post got featured in an e-magazine and has secured the Liebster Award. I'm so happy for this bubbling fashionista and wish her success in all she does!

To start with this is Anuradha Mohan A.K.A Anu Mohan and I am a fashion blogger. I promised Ram long time back that I would write up an article on Indian clothing for men , yes I did delay but here it is .. :D
To start with overall Indian ladies are associated with Sari but when it comes to men things are little different. I would broadly classify it into North Indian Ethnic Clothing and South Indian Ethnic Clothing; let’s not go too deep into it... ok?  :)
To be honest I love men who embrace Indian wear and carry it with a style, it can be a Veshti or a sherwani, I love them!!! Being a South Indian brought up in North I can proudly tell you that I love both the style..!!
Let me jump into the article before this keeps on getting bigger and bigger :P

This is one of the most worn clothing across the country in different styles. Predominantly by men of Tamil Nadu, Kerala, Andhra Pradesh, Maharastra, Karnataka, Bihar, Madhya Pradesh,Assam, West Bengal, Odisha ,Konkan and Goa. This is unstitched Piece of cloth usually paired with a Kurtha or a shirt or they can end up having a towel made of the same material as the Dhoti.

They can be in silk , cotton but rarely preferred in blended fibres.They are also called as pancha, mardani .They are wrapped around the hips to resemble something like a skirt ( mostly in southern India) or are tied to look something like a pant ( mostly in Northern India). Well but to be honest the one which is tied like a pant is used in South India too but not recognised with the masses. 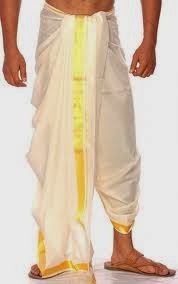 When/where are they worn ?

They are traditionally a daily wear but over time it has become an attire that is worn on festivals and wedding In remote parts of the country it is still worn for daily use .

Where can you buy them ?
For South Indian clothing : Ramraj Cotton India  and RMKV

They are a fusion of Salwar Kameez with western coat and have evolved over time . Created during the time of British rule, this attire became one of the grand yet formal Indian attire as Kings started wearing them. Let’s remember that yes they were used before British rule but the one which is used now is an evolved one.
They are essentially worn over a Kurtha and a Chudidar , widely known for the craftsmanship .They are worn in South Asia predominantly in India, Pakistan , Bangladesh and Sri Lanka . You all might have seen them being worn by heros in movie for all special occasions. 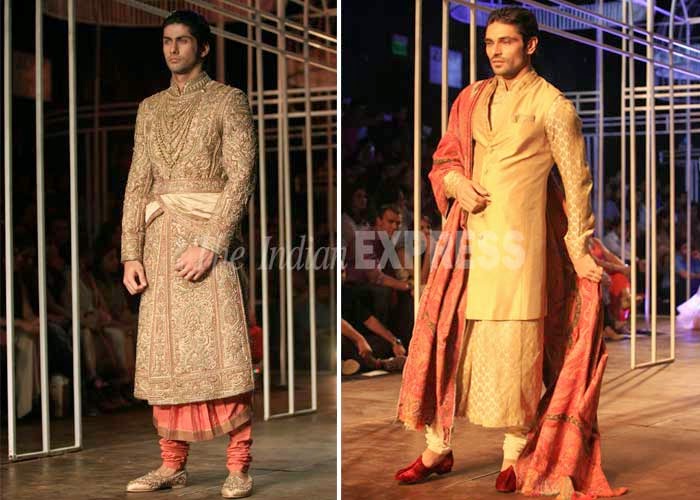 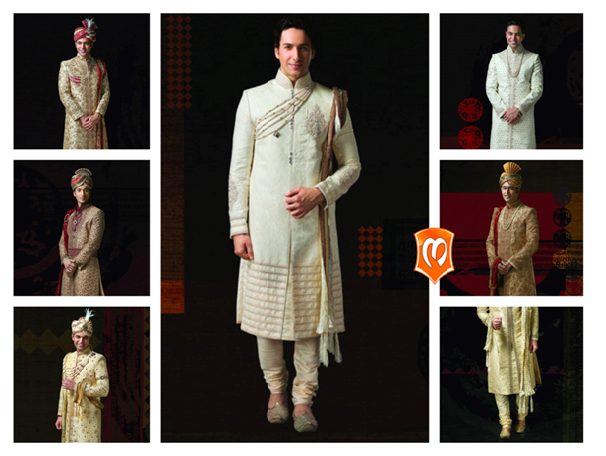 Taken from Manyavar Website
They are widely accessorized by todays men , which include gem studded broach , embroidery shoes and even turban .

When and Where are they worn ?
They were worn by kings and the royal advisors in kings court but in modern times they are mostly worn by Grooms and guest in Indian marriage.

They are also called as Jodhpuri suits and are an Indian substitute for Western two piece suite. They are usually done with moderate embroidery and they main element is Nehru collar. They are even now worn on formal occasions and can be spotted easily among politicians.
They are made by with either silk or suiting material and are generally lined at the collar. They are made plain ,jacquard or with Jamewari fibre .They are generally paired with trousers with can be same color as that of Bandhgala or can be contrasting.

When and where are they worn ?
As I told you they are mostly worn on formal event but there is a trend of wearing them for informal event too these days. 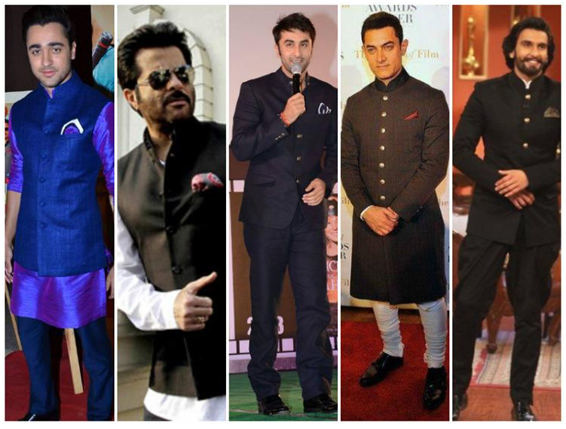 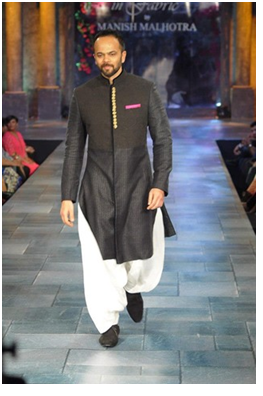 This is the most humble and underrated of all. They are simple Kurtha with Chudidhar pant which can be contrasting one or one matching the Kurtha. They are my favourite. I have seen even my brother wear them for numerous occasion and they look pretty dignified.
They are made in silk or cotton as these two are very comfortable for this climate . Men of any bulid can wear them and they are absolutely always in fashion. They can be made grand or simple depending on the occasion, personally I love turban with them .Do remember they can range from affordable to grand luxury ones.

Here are few photos of my friend Poojan who is my favourite when it comes Indian wear. 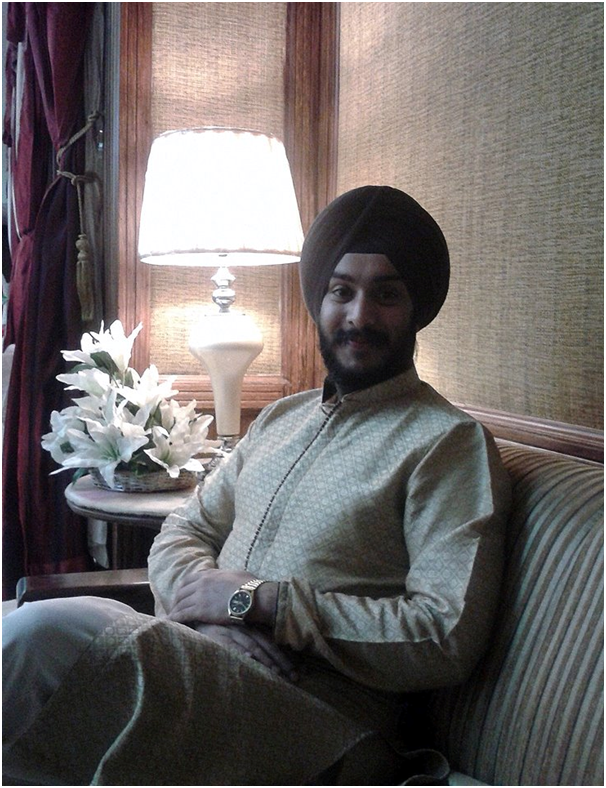 This is Beige designer wear by Manish Malhotra. It has got beautiful Chinkari work on silk.

Well you can also give a simple yet elegant look. Here again some photos of Poojan which can be worn on a day to day basis. 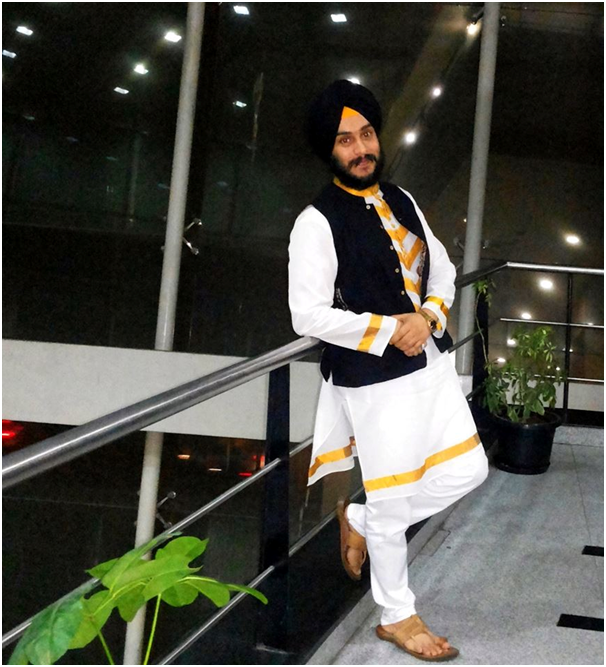 So if you are an Indian and you have an open mind , don’t forget to get yourself at least one of the above outfits. Well let’s be honest  from Kasmir  Sweters to Kanchipooram Silk , everything in this country is unique and beautiful , why not try it ?
Ok after this post I am secretly wishing that I should have been a guy :P
On serious note, if you love to wear them and  have no idea where to wear them ,here are few places you can try :

I hope all of you have enjoyed reading this post!! Thank you so much Ram for letting me do this post, had to do lot of research and stuff, got to learn so much .

My personal thanks to Anu for taking time and writing this post. Loved reading it and the specific information about clothing with pictures was lovely.

Do catch her on all her digital mediums!