Brand MSD- The Chanakya of Cricket!!

- June 25, 2013
MSD, an abbreviation which is well known in all cricketing circuits around the world. I've already written about Dhoni- Power Pack Sealed in an Ice Cube and this is probably the first time I'm writing about the same topic twice though the focus of the each of the posts vary. With all respectable trophies of International Cricket in his pocket, I feel this would be the appropriate moment to talk about a man who has revolutionized cricket within a short span of time.

I still remember the day, when I saw that wicket-keeper batsman with a long colored hair playing for India and hit a swashbuckling innings of 148 in Vizag against our arch rivals, Pakistan. Most of his shots were flat-batted hits and having attended cricket coaching I thought he can't sustain in the International arena without proper "technique". Then, Dhoni again surprised me with his yet another hammering innings of 183* against Sri Lanka in Jaipur. Frankly, his offbeat batting technique was not a pleasure to watch having seen the batting artistry of Sachin, Sourav and Dravid on the cricket field. But, Dhoni did cling to the Indian squad for the next two years as a specialist wicket-keeper and also chipped in batting performances from time to time.

Then, India was facing a rough patch during the ICC World Cup 2007 and made a shocking first round exit. It was that time when the concept of Twenty20 cricket of evolving and for a man who can "hit cricket balls like tennis balls" this format of cricket was more in tune with his abilities. All stalwarts of the Indian team then, were not picked for the Twenty20 World Cup. Dhoni was chosen as the captain with a bunch of young guns in the squad and India won the inaugural T20 World Cup. Dhoni's captaincy was just like his batting "unconventional yet it delivered the best possible outcome" and he was praised by the international media. From here, Dhoni went on to captain India in all three formats and has registered victories in almost all prestigious tournaments of Cricket. His journey after the 2007 World Cup is something every cricket lover in this cricket-crazy country is aware of and hence I don't want to talk more about it.

"If you want to judge a man's true character, give him power and money!", is a famous quote. MS Dhoni's popularity was largely due the fact that he could maintain his image both on and off the field. He is the richest cricketer and has even featured in "TIME's 100 Most Influential People."He is the second cricketer to do so after Sachin Tendulkar. I would rate MS Dhoni slightly higher than Sachin Tendulkar when it comes to achieving success and maintaining it. The reason why I would rate MSD high is because he backed his unconventional batting technique and changed the way cricket was meant to be played. In one of my earlier posts, Cricket- From a Gentleman's game to the Strongest man's game, I had talked about the craftsmanship involved during batting and the subtlety involved in bowling. Cricket, then was also informally addressed as a lazy-man's game since you had the liberty to play your game at your own pace. MS Dhoni changed this long held notion and with the advent of T20, Cricket became fast and entertaining. He ensured that his fielders are agile athletes and bring energy on the field. He believed that pressure situations are the ones when you can rediscover yourself. Arrogance will only show your weakness and Dhoni knows this very well. I believe only under the leadership of such a dynamic person, cricketers like Suresh Raina, Ravindra Jadeja, Virat Kohli, Rohit Sharma, Murali Vijay could have become who they are now. He never hesitates to take responsibility and his decision to push himself up in the ICC World Cup final to take India to a win supports this fact.

Whenever, I write about someone or something I ensure maximum credibility in what I write. Even as a person, MS Dhoni has impressed me a lot. The following incidence about which I'm gonna write provides necessary evidence as to how grounded a person Dhoni is. I don't know MSD in person but a friend of mine, who has been and will forever be a die-hard fan of Dhoni has met him in person.Yes! you heard me right. Our very own Chennai Super Kings captain met her along with another friend of mine in Sheraton hotel after she had requested Mrs. Sakshi Dhoni through a micro-blogging site. Bear in mind that, the girl I've mentioned here is Bhuvana (my collegemate) who has been following MSD for many years and this didn't happen in ONE DAY. She had no big references, no big money but just a large heart which yearned to meet her idol. She got a video wish and a signed ball for her birthday from MS Dhoni seeing her unconditional love towards him. That didn't decrease her affinity towards MSD and she met our captain to ensure her dream came true. I don't know which of TIME's influential persons will go on to meet someone who has a very humble background but Dhoni can.When she narrated the whole incident to me, my respect towards MSD only increased and with her consent I'm mentioning about her here. Her own version about the incident in English is here. 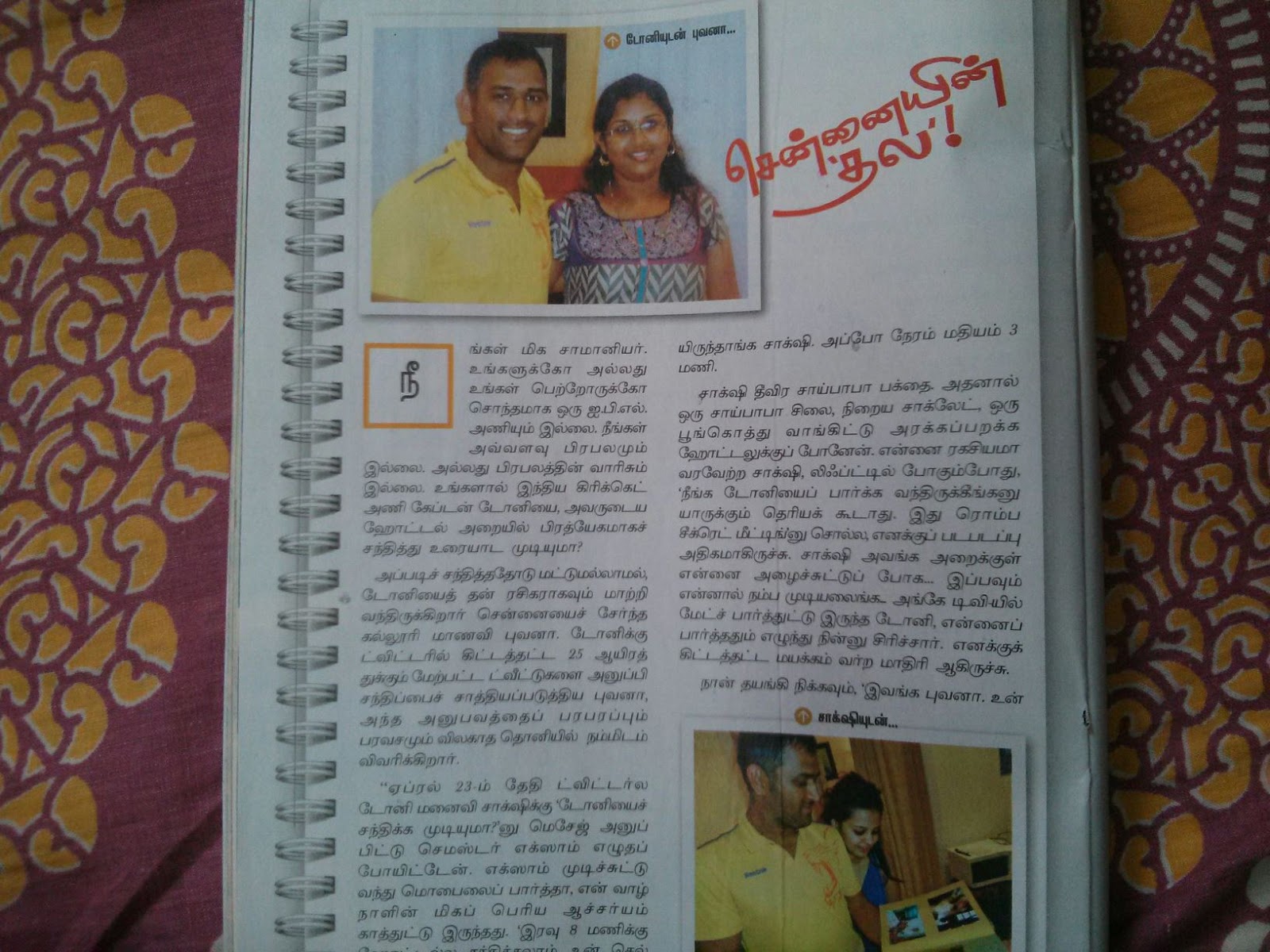 The above picture is the article in Anandha Vikatan about the girl I had mentioned in the above paragraph.

MS Dhoni has created a trademark for himself and has shown the legends of cricket that if you truly love the sport, there is no ONE technique to follow. You can leave a trail instead of following the path is what Dhoni has shown the critics.No matter how his shots look, he does deliver every time it's asked for and that is what is needed. His captaincy makes me address him as "Chanakya of Cricket" and I wish he defends the World Cup in 2015.

Yet another Dhoni fan,
Ram Thilak..

Image courtesy : Internet
My personal thanks to my friend Bhuvana for allowing me to share her note.
Personal Thoughts Random Sports