- May 10, 2013
Soodhu Kavvum, a movie starring Vijay Sethupathi was a complete, wholesome entertainer not failing a second in engaging the audience. Vijay Sethupathi completes a hat trick of hits with this movie along with Pizza and Naduvula Konjam Pakkatha Kaanum. He has been a sort of revelation for actors in the industry making them understand that still there is respect for true acting. This guy doesn't have boast of any six-pack abs, always holds a beard to cover a larger part of his face, doesn't change his appearance from movie to movie, no shooting of songs abroad yet renders hits incessantly till now. He has been an inspiration for actors without filmy background to strike big in Kollywood. The director of Soodhu Kavvum is yet another short film entrant into mainstream cinema. He has sent a strong message that with a good story and screenplay any movie could become a hit and go all guns blazing. 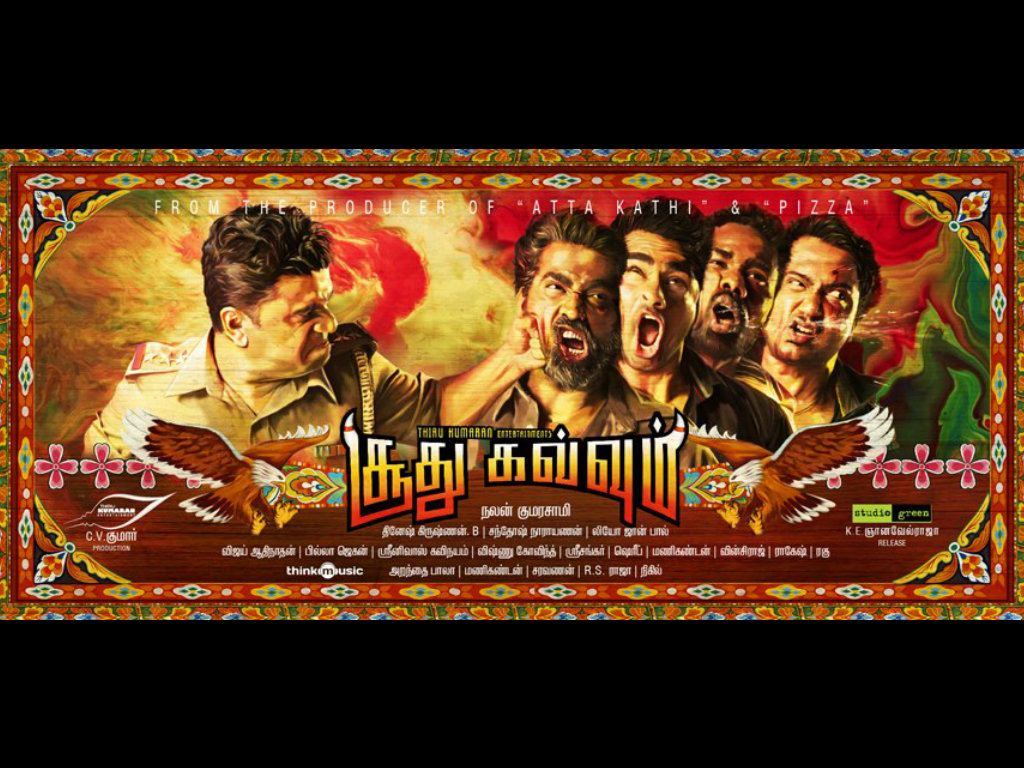 Coming to the story of Soodhu Kavvum, it's just a fun-filled film with a brilliant screenplay to engage the audience throughout. It starts with Das, a petty kidnapper who kidnaps people with "a heart". The way in which he kidnaps, then negotiates and finally releases the kidnapee is supremely hilarious. Three young men (Kesavan, Sekar and Pagallavan), two of whom have just lost a job and one jobless joins Das accidentally in a wine shop and they become a team finally. They continue their small-time kidnaps and once a big opportunity to kidnap Minister's son (Arumai Prakasham) comes to them. They decide to take this on but things go wayward when Minister's son kidnaps himself to demand ransom from his father for his future. Somehow, Das's group finds Arumai Prakasham and seeing their "good-natured kidnapping methodology", Arumai decides to share the ransom.The first half ends here and post intermission the film gets far more "usual" with police chasing the kidnappers. There is a mockery over politics interspersed with these kidnappings in Soodhu Kavvum which proves to be a excellent combo.

Soodhu Kavvum is a genre of movie where we shouldn't demand a lot of logic and realism. The unexpected twists in the story and the acting of these upcoming young actors have to be increasingly appreciated. New directors in Tamil cinema have understood that stereotypical flicks with punch dialogues, item numbers, romance, love failure songs aren't just enough to get audience interests. Those days are gone and people have started welcoming fresh attempts in cinema. Comedy is a forte which many short film directors have taken as a route to enter mainstream cinema and most of them have been successful.

To sum up, Soodhu Kavvum is definitely a must-watch movie for all audiences.You can step into the cinema hall and you can be guaranteed of 130 odd minutes of merry if you don't start analyzing the sequences too much with your brain.Happy to see people encouraging good cinema such as Soodhu Kavvum when most of them are star worshipers in Kollywood. Full marks to the director for rendering the film pleasantly with a shoe-string budget build strongly on story and screenplay.